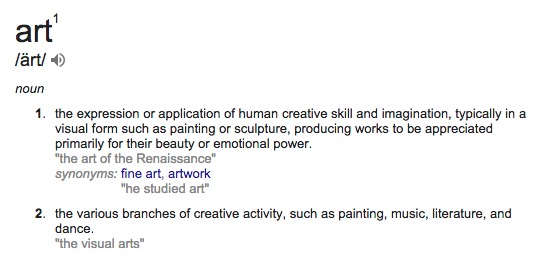 Admittedly, Googling “what is art” was an exciting venture for me. At first I thought the simple script would cause smoke to begin pouring from my hard-drive. I imagined that this is the type of question you would use against a cyborg to cause it to self-destruct, but then again, I am an artist. What exactly does that mean? I am the type of person that sees art in almost anything without having to cram the square peg into a round hole. I was prepared for even Google to fall short of my own personal definition of “what is art”, but then, like a fortune cookie, Google nails it with a broad net. For just a minute the cynic in me was screaming for them to BRING IT ON, then they disarmed my internal time bomb with two words: “emotional power”. This is exactly what I think “art” is, and why I truly believe that art can be found in the most unsuspecting of places.

If you recall, we recently posted an “ongoing” exposé of music as art, and began with Flowers Are Red by Harry Chapin. After careful consideration, we (as a committee) became convinced that the greater picture was being ignored and that a great injustice was inadvertently being done to every finger of creation and happenings that fit into the art category by definition of things that hold “emotional power”.

I have been an artist all of my life. So much so that when I “grew up” I was convinced that I was supposed to do something else because it was never work to me until I realized that there is a way. However, I first became aware of the emotional power of art in my early 20’s. Here is that story.

I was lucky enough to be in the Guggenheim in New York. My friend and I were on a cross-country tryst. This was a last minute adventure to really get to know each other by escaping the ills and obligations of west coast life. While there, we decided to fit as much “New York” into our short time as humanly possible. The itinerary was ridiculous, even by a youthful standard. In a 48 hour period we went to Phantom of the Opera on Broadway, ate at Jerry’s Famous, saw a taping of the David Letterman Show and Kelly and Regis, picnicked in Central Park, took the subway (at midnight), walked to the middle of the Brooklyn Bridge and went to the Guggenheim. It was here at our last stop that I entered the stark white hallway displaying multiple artists and their masterpieces. From a hundred yards away I could see that the end of the hall ended in an abstract two-tone piece with a bench in front of it. I didn’t really care about the bright orange and deep blue painted boxes on the wall; it was the bench in front of it I needed. I just wanted to sit down as the weekend was catching up to me. I made it to the bench, sat and began to look at this painting. My mind was blank, which in hindsight served me well. The painting was by Mark Rothko and as I began to stare at it, something inside me stirred. It started in my belly then slowly moved in both directions towards my toes then my head, leaving that “prickly skin” feeling in its path as it traversed my insides. As I got lost in the deep blue and contrasting orange, and without any warning, I began to cry. Not sob, but simply allow my tears to free fall in homage to this work of art against all of my better judgment, and I did not care, this moment was out of my control and was the true essence of “emotional power” of art!

This day taught me more about art than my previous 22 years on the planet. I became aware that art is anything that takes over your momentary perception and makes emotional decisions on your behalf, with or without your approval. That “art” can be music, nature, children, or anything else that moves you without the necessity of a paintbrush or crayon. Our only duty then is to recognize that moment and properly label it as “art”.

We are going to attempt to share with all of you the things that we see as art on a monthly basis, and really open up the discussion. We employ you to go to our Facebook Page and post your own thoughts on art. Where were you when art got redefined? What then is your new definition of “art”? Are you listening to what you see?

Hold onto you hats and glasses, this could get emotional because it should!